Day 2 of our stay in Paris was fantastic. We woke up a bit late, due to some jetlag most likely, and headed out. Our first stop was Monet's House in Giverny, just northwest of Paris.  We caught a train, then a bus and made it the beautiful town of Giverny.  We got to see the gardens and lily pond that we see in many of his paintings.  Megan and I love Monet.  The first time I was a Monet painting in the Houston museum, I sat in stared at it for 20 minutes.  I finally understood the art.  The textures and colors were amazing.  So for us, seeing it the places that inspired Monet, and many others, was amazing.  Our trip has been plagued by overcast skies, so the pictures don't do it justice.  Also, it's not quite spring here yet, so many of the colors in the garden haven't come out yet.  We also go to tour his house, though no pictures were allowed.  Most of the art in the house was some traditional Japanese art, not what we expected. 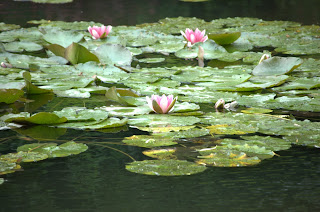 We left Monet's and headed over to the Eiffel Tower (Tour Eiffel in French). WOW! My whole life I've seen pictures and movies with the tower, but seeing it person was truly amazing.  It's not black, it's brownish - who knew?  There were lots of people there but it it wasn't really crowded.  We were going to ride up to the top, but it was threatening rain.  We're going to try tomorrow.  After that, we walked down Rue Cler, a neat little pedestrian street a few blocks from the tower. 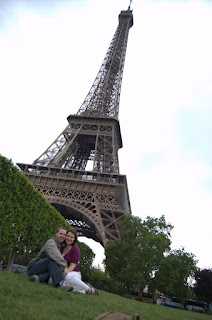 For dinner we ate at a little place near our apartment.  We ordered a plat de frommage (cheese plate).  We agreed that was our last cheese plate.  Nothing like eating stinky cheese.  One of the cheeses smelled and tasted like sulfer or rotten eggs.  Not cool. 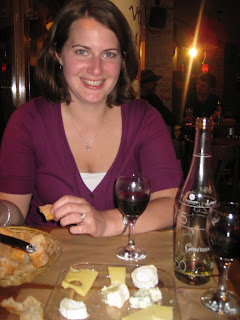 (Don't eat the middle one!)
We ended the night with a stroll up to Basilique du Sacré-Cœur, a church on a hill near our apartment.  From there, we couuld see the Paris lights and the Eiffel Tower lit up. We even saw some fireworks.  Overall, we had a great day in Paris.  Check out our albums each day for pictures. 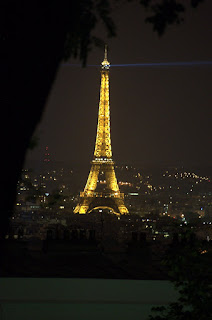