With this being our first visit to New England, we really didn't know what to expect.  Prior to our visit, we booked a room at an inn called 76 Main http://www.76main.com/.  I called and talked to David, the innkeeper for the past 11 years.  He's a retired in his 70's and was really our only non-internet or travel guide source for information prior to the visit.  He convinced us not to go to Martha's Vineyard and to stay an extra night in Nantucket.  Turns out that our plan to make a day trip to MV didn't work since they no longer have day trip ferries between the islands.  So we were stuck on ACK (the airport code for Nantucket) for 3 days.
The evening we arrived, we got off the ferry and walked a few blocks up Main St where on the dark street somone called out my name.  I looked up to see David (had know idea what he looked like before that moment, but recognized the voice) on the sidewalk coming down to greet us.  We took us in, gave us a tour and then we slept.

Travel on ACK is interesting.  While people are encouraged not to bring cars to the island, there sure was a lot of traffic each day as cars came in off the ferry.  There are no street lights and it works well.  Drivers are very aware of pedestrians and courteous to each other at intersections.  I guess when it's the only system you have, it has to work smoothly.  Other travel options included bike, jeep or moped rentals, public bus system (WAVE http://www.nrtawave.com/) or foot.  We chose the later two.  The first day, we decided to get a day pass on the bus and ride various routes around the island to check out possible future biking locations.

It's amazing how deceptive maps can be.  ACK seemed very small on paper, but quite large when you are on foot on contemplating a 6 mile bike ride.  The first route we took was to the far east end of the island to the town of Siasconet ('Sconet to the locals).  Turns out that the "scenic" route would have been quite boring on a bike.  It was mostly trees with an occasional glimpse of the typical grey weathered cedar shake houses.  We were glad we chose to ride the bus.  We got off, ate lunch then walked to the beach. 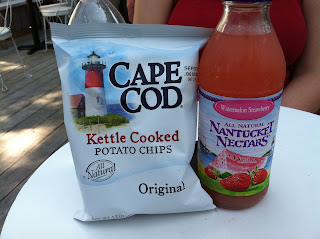 The beach was nice and long and was quite a bit higher than the water.  We tested the water temp and decided that it was a bit to chilly for our southern bodies.  Instead we walked to shoreline then sat for a while.  According to our inkeeper, the entire shoreline of ACK is public and each year the residents walk the beach to commemerate their commitment to...I lost interest, but you get the idea.

After the beach we took a different route back, went to our room, napped then headed back out on the bus to Madaket on the far west side to watch the sunset.  I had my first lobser roll at Millies, the only eatery on that end of the island.  Then we sat on the beach for a while and watched the sun disappear.  It was so wonderful.  We even got to watch a seal bobbing out in the water. 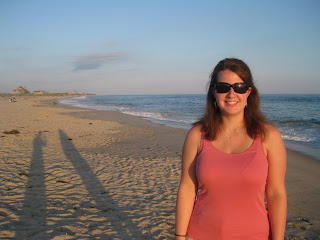 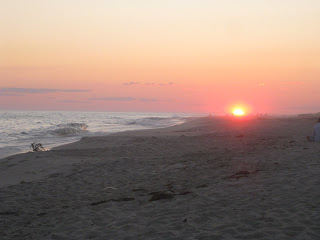 It was a perfect day except for the fact that it was 80 degrees all day and we sweated much more than we were anticipating.
Posted by Adam at 11:18 PM